Referral program get your discount

From 12 August to 26 August we are on holiday. During this period you can order as usual, however, the order will be shipped from August 26. To compensate you for the longer waiting time, you can use a discount coupon worth 10% of the purchase amount. The coupon code is, 082022 Thank you for your understanding. 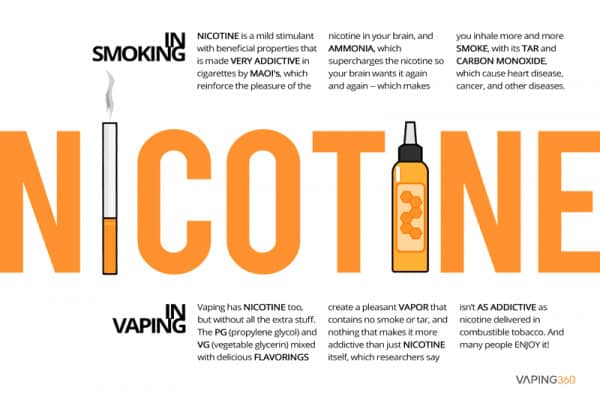 How much nicotine is in one cigarette?

You are here: Home / Blog / How much nicotine is in one cigarette?
January 25, 2020 by UK e liquid nicotine

When Vapers ask how much nicotine is in a cigarette, it is often because they are trying to calculate what nicotine concentration they want in E-Liquid. The idea is to imitate the blow they get from cigarettes and get the same nicotine experience from Vaping that they get from smoking.

But knowing how many milligrams of nicotine are contained in a cigarette does not necessarily mean that you are vaping. That’s because the method of delivery is very different, and even an equivalent amount of nicotine will not give the same kick when delivered in vape versus a cigarette.

Nicotine is a complex issue. Vaping360 is a And our nicotine articles are designed for Vaping. But since most Vapers were once smokers and many smokers are looking for low-risk alternatives to cigarettes, we want to examine all aspects of nicotine consumption. This is also a pretty interesting topic, and if the FDA succeeds in reducing nicotine in cigarettes below the addictive level, it will soon become even more interesting!

So, how much nicotine is in one cigarette? It is a simple question, isn’t it?

Well, no. There is between 0.65 and 1 gram of tobacco in an average unlit cigarette that contains somewhere between 7.5 and 13.4 milligrams of nicotine, according to tests conducted at Penn State University’s Behavioral Endocrinology Laboratory. Newport cigarettes had tested the most nicotine of all American brands, at 13.4 milligrams per cigarette.

The median of all tested brands was 10.2 mg per cigarette. A separate study by Centers for Disease Control and Prevention (CDC) scientists shows that Newport and Marlboro brands contain about the same amount of nicotine (19.4 and 20.3 mg) per gram of tobacco. The average nicotine content for all brands tested by the CDC was 19.2 mg per gram of tobacco.

This certainly refutes the claim that a JUUL-Pod contains “as much nicotine as a pack of cigarettes”. A JUUL-Pad contains 41 mg nicotine (0.7 mL X 59 mg/ml), but an average cigarette pack contains 204 mg nicotine (20 cigarettes X 10.2 mg) – and some brands contain considerably more.

According to Prof. Bernd Mayer from the Department of Pharmacology and Toxicology at the Karl-Franzens University of Graz (Austria) “Smoking a cigarette leads to an intake of about 2 mg nicotine and results in an average arterial plasma concentration of about 0.03 mg/L (30 ng/ml)”. Mayer is a well-known expert on nicotine, but other researchers have slightly different answers. UCLA professor Arthur Brody says that typical “light” cigarettes yield 0.6-1.0 mg and regularly smoke 1.2-1.4 mg per cigarette.

So cigarettes provide the smoker with much less nicotine than they actually contain. The difference may seem big, but in reality it may not matter. This is because smokers (and vapers) control their nicotine intake for the most part, and because other factors account for a large part of a cigarette’s heavy nicotine intake.

Nicotine is nicotine, right?
When we take nicotine, we decide how much nicotine we take in – by smoking more or less, faster or slower, more or less often. This is called self-titration, and all nicotine users do it.

You know what it feels like to have too much nicotine, don’t you? Whether you get the medicine from cigarettes or a vape, the effect is the same:

Vertigo
Headache
Nausea
Cold welding
Insomnia
Racing heart
Fearful or nervous
Ringing Ears
But because our body knows when we have enough, we stop or slow down. For experienced nicotine users the process is almost unconscious. Self-titration is our brain that tells us when our body needs more or less. And it is these warning signs that prevent nicotine overdoses. No one overdoses on cigarettes or videos. You would have to keep inhaling while vomiting and dealing with splitting headaches!

This is how nic users keep up to date with self-titration. But getting nicotine out of a cigarette is a little more complicated. Between the tobacco itself and the tobacco companies, cigarettes are built to deliver a charged dose of nicotine to the brain.

Apart from nicotine, cigarettes contain other chemicals that increase the nicotine release of the smoke. Monoamine Oxidase Inhibitors (MAOI’s) combine with nicotine to produce an amplifying effect in the brain, which makes users more often crave more nicotine.